Although the microprocessor and digital network technologies have fundamentally reinvented the ways in which today's data acquisition systems handle data, much laboratory and manufacturing information is still communicated the "old" way, via analog electrical signals. And a fundamental understanding of how analog signal transmission works must first begin with a discussion of electrical basics.

To understand the ways in which an analog signal is transmitted over a circuit, it is first important to understand the relationships that make analog signal transmission possible. It is the fundamental relationship between voltage, current, and electrical resistance (Figure 3-1) that allow either a continuously varying current or voltage to represent a continuous process variable.

While charge flow is electric current, voltage is the work done in moving a unit of charge (1 coulomb) from one point to another. The unit of voltage is often called the potential difference, or the volt (V). The International System of Units (SI) unit for electrical flow is the ampere (A), defined as one coulomb per second (c/s).
A signal source of voltage, V, will cause a current, I, to flow through a resistor of resistance, R. Ohm's law, which was formulated by the German physicist Georg Simon Ohm (1787-1854), defines the relation:


While most single-channel analog signal transmissions use direct current (dc) variations in current or voltage to represent a data value, frequency variations of an alternating current (ac) also can be used to communicate information. In the early 19th century, Jean Baptiste Joseph Fourier, a French mathematician and physicist, discovered that ac signals could be defined in terms of sine waves. A sine wave is described by three quantities: amplitude, period, and frequency. The amplitude is the peak value of the wave in either the positive or negative direction, the period is the time it takes to complete one cycle of the wave, and the frequency is the number of complete cycles per unit of time (the reciprocal of the period).


Most data acquisition signals can be described as analog, digital, or pulse. While analog signals typically vary smoothly and continuously over time, digital signals are present at discrete points in time (Figure 3-2). In most control applications, analog signals range continuously over a specified current or voltage range, such as 4-20 mA dc or 0 to 5 V dc. While digital signals are essentially on/off (the pump is on or off, the bottle is there or isn't), analog signals represent continuously variable entities such as temperatures, pressures, or flow rates. Because computer-based controllers and systems understand only discrete on/off information, conversion of analog signals to digital representations is necessary (and discussed in Chapter 1).
Transduction is the process of changing energy from one form into another. Hence, a transducer is a device that converts physical energy into an electrical voltage or current signal for transmission. There are many different forms of analog electrical transducers. Common transducers include load cells for measuring strain via resistance, and thermocouples and resistance temperature detectors (RTDs) for measuring temperature via voltage and resistance measurement, respectively. Transmission channels may be wires or coaxial cables.

Image Caption Title
For noise-resistant transmission over significant distances, the raw transducer signal is often converted to a 4-20 mA signal by a two-wire, loop-powered transmitter. The bottom value of a process variable's range, for example, a temperature, is typically designated as 4 mA, making it easy to distinguish transmitter failure (0 mA) from a valid signal. If the current source is of good quality, current loops tend to be less sensitive to noise pickup by electromagnetic interference than voltage-based signals.


In transmitting analog signals across a process plant or factory floor, one of the most critical requirements is the protection of data integrity. However, when a data acquisition system is transmitting low level analog signals over wires, some signal degradation is unavoidable and will occur due to noise and electrical interference. Noise and signal degradation are two basic problems in analog signal transmission.
Noise is defined as any unwanted electrical or magnetic phenomena that corrupt a message signal. Noise can be categorized into two broad categories based on the source-internal noise and external noise. While internal noise is generated by components associated with the signal itself, external noise results when natural or man-made electrical or magnetic phenomena influence the signal as it is being transmitted. Noise limits the ability to correctly identify the sent message and therefore limits information transfer. Some of the sources of internal and external noise include:

Signal leads can pick up two types of external noise-common mode and normal mode. Normal mode noise enters the signal path as a differential voltage and cannot be distinguished from the transducer signal. Noise picked up on both leads from ground is referred to as common-mode interference.


Typical ranges for data signals and noise are shown in Figure 3-3. Whether the noise is detrimental to the proper performance of the system depends on the ratio of the total signal power to the total noise level. This is referred to as the signal-to-noise ratio. If the signal power is large in comparison to the noise signal, the noise can often times be ignored. However, with long-distance signals operating with limited signal power, the noise may disrupt the signal completely.
Current-driven devices have been most widely accepted in processing plants, with a common current range of 4-20 mA. Low-level current signals are not only safe, but are not as susceptible to noise as voltage signals. If a current is magnetically coupled into the connecting wires in the transmission of the signal from a current source, no significant change in the signal current will result. If the transducer is a voltage-driven device, the error adds directly to the signal. After current transmission, voltage signals can be easily rederived.
Even though internal and external interference can be problematic in sending analog signals, analog signal transmission is widely and successfully used in industry. The effects of noise can be reduced with careful engineering design, proper installation, routing techniques of wires and cables, and shielding and grounding.
One of the ways in which engineers have tried to minimize the effects of noise is to maximize the signal-to-noise ratio. This involves increasing the power of the signal being sent. Although this works in some cases, it has its limitations. By increasing the signal, nonlinear effects become dominant, as the signal amplitude is increased-it enhances the signal and the noise in the same proportion.
Proper grounding also is essential for effective operation of any measurement system. Improper grounding can lead to potentially dangerous ground loops and susceptibility to interference. To understand the principles involved in shielding and grounding, some terms must first be understood. A ground is a conducting flow path for current between an electric circuit and the earth. Ground wires are typically made with materials that have very low resistance. Because current takes the path of least resistance, the ground wires connected from the system provide a stable reference for making voltage measurements. Ground wires also safeguard against unwanted common-mode signals and prevent accidental contact with dangerous voltages. Return lines carry power or signal currents (Figure 3-4). A ground loop is a potentially dangerous loop formed when two or more points in an electrical system are grounded to different potentials.

There are many different grounding techniques designed to not only protect the data being transmitted, but to protect employees and equipment. There are two ways in which all systems should be grounded. First of all, all of the measuring equipment and recording systems should be grounded so that measurements can be taken with respect to a zero voltage potential. This not only ensures that potential is not being introduced at the measuring device, but ensures that enclosures or cabinets around equipment do not carry a voltage. To ground an enclosure or cabinet, one or more heavy copper conductors are run from the device to a stable ground rod or a designated ground grid. This system ground provides a base for rejecting common-mode noise signals. It is very important that this ground is kept stable.
The second ground is for the signal ground. This ground is necessary to provide a solid reference for the measurement of all low-level signals. It is very important that this ground is grounded separate and isolated from the system ground. If a signal return line is grounded at the signal source and at the system ground, a difference in potential between the two grounds may cause a circulating current (Figure 3-5). In this case, the circulating current will be in series with the signal leads and will add directly to the signal from the measuring instrument. These ground loops are capable of creating noise signals 100 times the size of the original signal. This current can also be potentially dangerous. In a single-point ground configuration, minimal current can flow in the ground reference. Figure 3-6 shows that by grounding the wire at the signal end only, the current has no path, eliminating the ground loop.

Image Caption Title
For off-ground measurements, the shield or the ground lead is stabilized with respect to either the low-level of the signal or at a point between the two. Because the shield is at a potential above the zero-reference ground, it is necessary to have proper insulation.


Another important aspect to consider in analog signal transmission is a proper wiring system, which can effectively reduce noise interference. Analog signal transmission typically consists of two-wire signal leads or three-wire signal leads. In systems that require high precision and accuracy, the third signal lead, or shield, is necessary. In the three-wire configuration, the shield is grounded at the signal source to reduce common-mode noise. However, this does not eliminate all of the possibilities of the introduction of noise. It is crucial to prevent the noise pickup by protecting the signal lines. For example, in the case where the noise and signal frequency are the same. In this scenario, the signal cannot be isolated/filtered from the noise at the receiving device.

Image Caption Title
Generally, two-wire transmission mediums are used to carry an analog signal to or from the field area. A wire carrying an alternating current and voltage may induce noise in a pair of nearby signal leads. A differential voltage/noise will be created since the two wires may be at different distances from the disturbing signal. There are many different wiring options that are available to reduce unwanted noise pickup from entering the line. Four types of wires are fundamental in data acquisition-plain pair, shielded pair, twisted pair, and coaxial cable.
While plain wire can be used, it is generally not very reliable in screening out noise and is not suggested. A shielded pair is a pair of wires surrounded by a conductor that does not carry current. The shield blocks the interfering current and directs it to the ground. When using shielded pair, it is very important to follow the rules in grounding. Again, the shield must only be grounded at one source, eliminating the possibility of ground-loop currents.
Twisted-pairs help in elimination of noise due to electromagnetic fields by twisting the two signal leads at regular intervals. Any induced disturbance in the wire will have the same magnitude and result in error cancellation.
A coaxial cable is another alternative for protecting data from noise. A coaxial cable consists of a central conducting wire separated from an outer conducting cylinder by an insulator. The central conductor is positive with respect to the outer conductor and carries a current (Figure 3-7). Coaxial cables do not produce external electric and magnetic fields and are not affected by them. This makes them ideally suited, although more expensive, for transmitting signals. 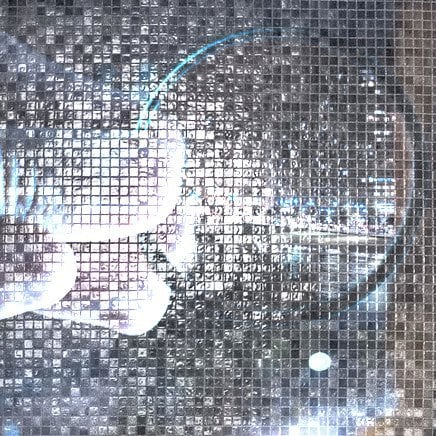 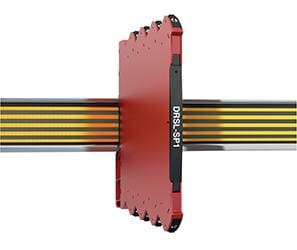