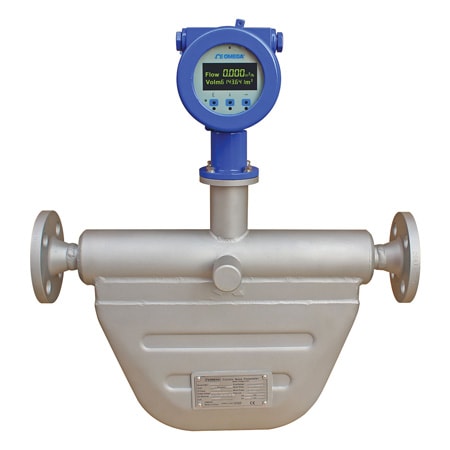 It was G.G. Coriolis, a French engineer, who first noted that all bodies moving on the surface of the Earth tend to drift sideways because of the eastward rotation of the planet. In the Northern Hemisphere the deflection is to the right of the motion; in the Southern, it is to the left. This drift plays a principal role in both the tidal activity of the oceans and the weather of the planet.

Because a point on the equator traces out a larger circle per day than a point nearer the poles, a body traveling towards either pole will bear eastward, because it retains its higher (eastward) rotational speed as it passes over the more slowly rotating surface of the earth. This drift is defined as the Coriolis force.

The first industrial Coriolis patents date back to the 1950s, and the first Coriolis mass flow meters were built in the 1970s. These flow meters artificially introduce a Coriolis acceleration into the flowing stream and measure mass flow by detecting the resulting angular momentum.

When a fluid is flowing in a pipe, and it is subjected to Coriolis acceleration through the mechanical introduction of apparent rotation into the pipe, the amount of deflecting force generated by the Coriolis inertial effect will be a function of the mass flow rate of the fluid. If a pipe is rotated around a point while a liquid is flowing through it (toward or away from the center of rotation), that fluid will generate an inertial force (acting on the pipe) that will be at right angles to the direction of the flow. 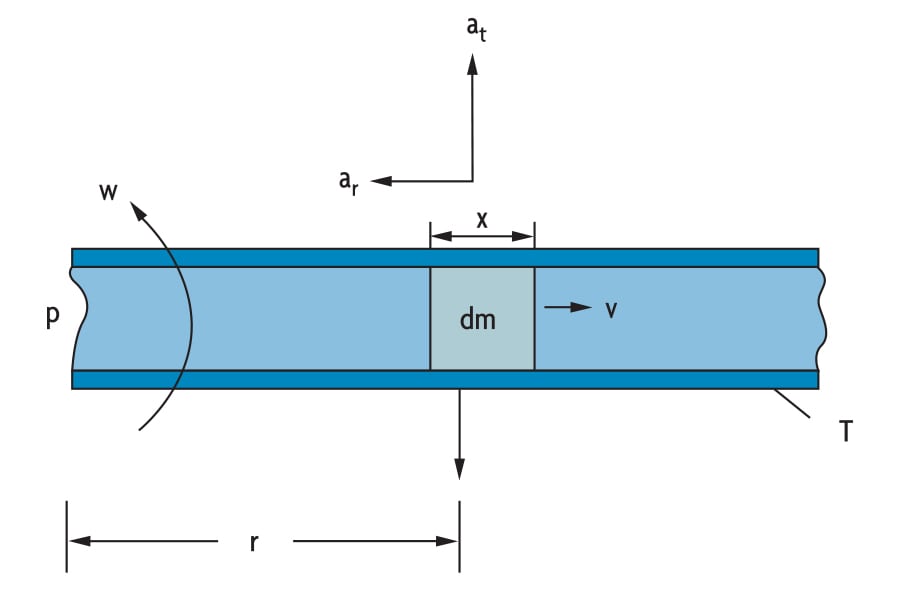 With reference to Figure 5-2, a particle (dm) travels at a velocity (v) inside a tube (T). The tube is rotating about a fixed point (P), and the particle is at a distance of one radius (r) from the fixed point. The particle moves with an angular velocity (w) under two components of acceleration, a centripetal acceleration directed toward P and a Coriolis acceleration acting at right angles to ar:

Then, if the process fluid has density D and is flowing at constant speed inside a rotating tube of cross-sectional area A, a segment of the tube of length x will experience a Coriolis force of magnitude:

Because the mass flow rate is dm = DvA, the Coriolis force Fc = 2w(dm)x and, finally:

This is how measurement of the Coriolis force exerted by the flowing fluid on the rotating tube can provide an indication of mass flowrate. Naturally, rotating a tube is not practical when building a commercial flow meter, but oscillating or vibrating the tube can achieve the same effect. Coriolis flow meters can measure flow through the tube in either the forward or reverse directions.

In most designs, the tube is anchored at two points and vibrated between these anchors.

The first generation of Coriolis meters consisted of a single curved and a thin-walled tube, in which high fluid velocities were created by reducing the tube cross-sectional area in relation to the process pipe. The tube distortion was measured in reference to a fixed point or plane. The tubes were excited in such a way that localized high amplitude bending forces were created at the anchor points. This resulted in severe vibration problems, which were alleviated by two-tube designs (Figure 5-3A).

These designs reduced external vibration interference, decreased the power needed to vibrate the tubes, and minimized the vibrational energy leaving the tube structure. One driver was used to initiate tube vibration, and two sensors were used to detect the Coriolis deflections. While this design greatly improved performance, the combination of reduced bore, thin-walled tubing, and high fluid velocities (up to 50 ft/sec) still resulted in premature meter failure, including potentially catastrophic spills when the meter was used on corrosive and erosive services. In addition, the unrecovered head losses were high (sometimes over 50 psid), and accuracy was not high enough to allow users to convert batch processes into continuous ones. 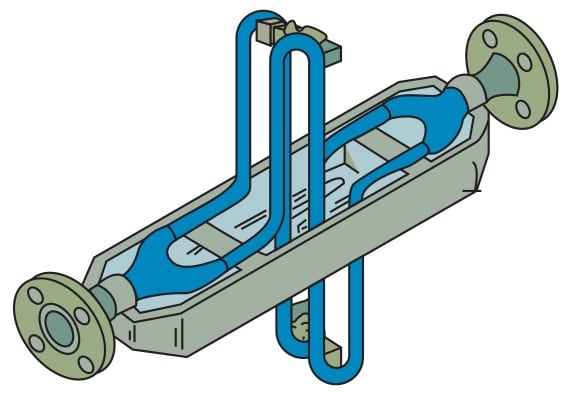 More recent design improvements include the introduction of a variety of new tube shapes, including ones that do not split the flow (Figure 5-3B) and the use of multiple drivers (Figure 5-5A). Thick-walled tubing (five times thicker than early designs), the use of full bore diameters and heavy manifolds to isolate the tube structure from stresses induced from piping connections, and flow tube housings that double as secondary containment vessels have all contributed to improved performance.

In some designs, torsional stresses replaced bending, to prevent the concentration of stresses that can lead to tube cracking (Figure 5-5B). In other designs, the effects of pipeline vibration have been minimized by mounting the tube structures transverse to the pipeline.

These improvements increased the number of suppliers and contributed to the development of a new generation of Coriolis meters that are as reliable and rugged as traditional volumetric flow meters. The new designs operate at lower fluid velocities (below 10 ft/sec) and at lower pressure drops (under 12 psid), can be installed in any orientation, and provide longer service life on slurry, viscous, corrosive, or erosive services. The tubes are vibrated well below their endurance limits and typically are made of stainless steel, Hastelloy®, and titanium.

A tube can be of a curved or straight form, and some designs can also be self-draining when mounted vertically (Figure 5-3). When the design consists of two parallel tubes, flow is divided into two streams by a splitter near the meter's inlet and is recombined at the exit. In the single continuous tube design (or in two tubes joined in series), the flow is not split inside the meter.

In either case, drivers vibrate the tubes. These drivers consist of a coil connected to one tube and a magnet connected to the other. The transmitter applies an alternating current to the coil, which causes the magnet to be attracted and repelled by turns, thereby forcing the tubes towards and away from one another. The sensor can detect the position, velocity, or acceleration of the tubes. If electromagnetic sensors are used, the magnet and coil in the sensor change their relative positions as the tubes vibrate, causing a change in the magnetic field of the coil. Therefore, the sinusoidal voltage output from the coil represents the motion of the tubes.

When there is no flow in a two-tube design (Figure 5-3A), the vibration caused by the coil and magnet drive results in identical displacements at the two sensing points (B1 and B2). When flow is present, Coriolis forces act to produce a secondary twisting vibration, resulting in a small phase difference in the relative motions. This is detected at the sensing points. The deflection of the tubes caused by the Coriolis force only exists when both axial fluid flow and tube vibration are present. Vibration at zero flow, or flow without vibration, does not produce an output from the meter. 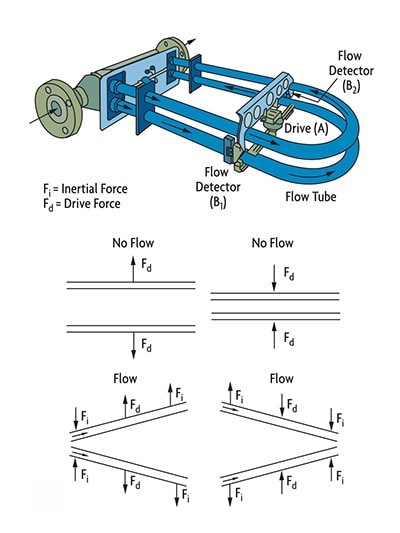 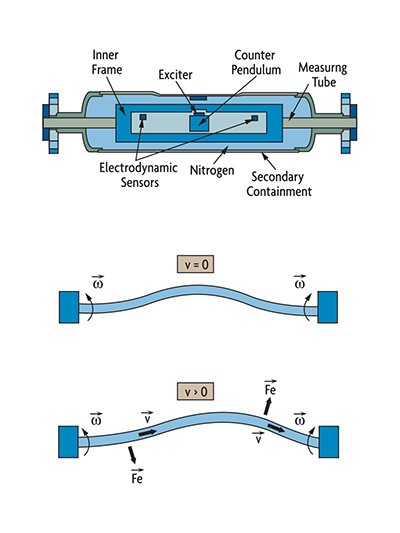 Wall thickness varies considerably from design to design; however, even the sturdiest tubing will be thinner than the process piping. Also, some designs use small bore tubing, which drastically increases the flowing velocity (from 5-10 ft/sec to more than 25 ft/sec). Designs with thin walls and high fluid velocities (that is, small bore tubing), may require the use of exotic materials because of erosion concerns. One will obtain the longest meter life by selecting the design with the thickest wall and the slowest flow velocity that can provide the required accuracy and range.

The Coriolis meter may need to be made out of exotic materials because of corrosion considerations or to prevent pitting. Carbon or stainless steel can often be used in process piping because a small amount of pitting can be tolerated. In regards to the Coriolis meter, even a small amount of pitting cannot be tolerated because the walls are thin, and pitting induces stress concentrations within the tube structure. Therefore, standard corrosion tables (based on weight loss criteria) are not suitable for selecting Coriolis tube materials, and the stricter guidelines of the manufacturers must be used.

Transmitters can operate on either ac or dc power and require separate wiring for the power supply and their output signals. The Coriolis flow meter transmitter can be integrally or remotely mounted (Figure 5-4). The transmitter controls the operation of the driver and processes and transmits the sensor signals. The calibration factor (K) in the transmitter's memory matches the transmitter to the particular flow tube. This calibration factor defines the constant of proportionality between the Coriolis force and the mass flow rate for the dynamic spring constant of the particular vibrating tubes.

Transmitters are often provided with local displays and keypads to allow easy access to process data. Coriolis transmitters provide more than just flow information and ancillary functions. Batch control functions, percent Brix or percent HFCS monitoring, viscosity, percent solids, PID, API gravity, and specific gravity also are available. When viscosity information is desired, the meter pressure drop needs to be measured. Other features may require information to be pre-programmed into the transmitter memory. In addition, transmitters have other hardware and software options, which allow the user to customize them to the application. 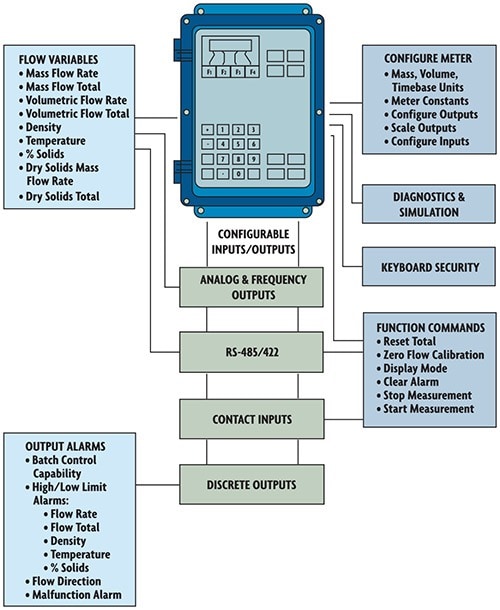 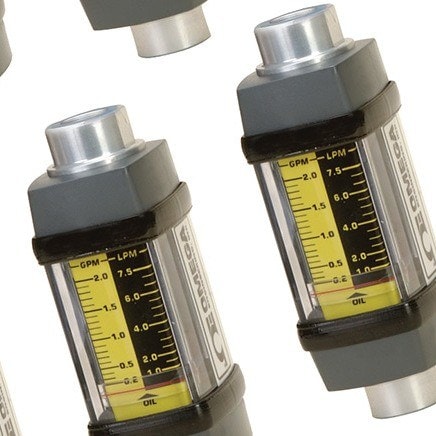 Flow meters | What is & How it Works What is a Flow Meter? 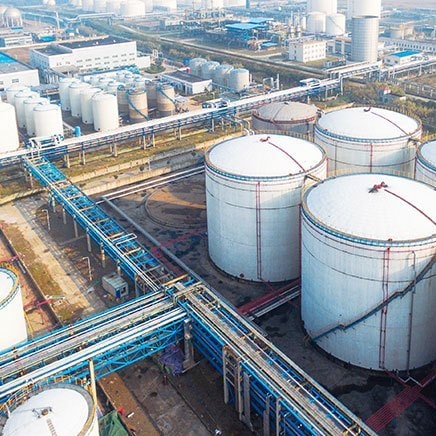