A team of Omega engineers, led by Director of Engineering Ken Leibig, set out to see if they could come up with a better, more efficient, and more cost-effective alternative to the status quo method for accurately measuring the temperature of fluid media inside a pipe – which is to use an invasive immersion probe.

The HANI installs with the ease of a surface sensor but offers the high accuracy and high performance of an immersion sensor. It’s the best of both worlds, and a game-changer for professionals in a wide array of industries – from Food & Bev to Pharmaceutical to Aerospace.

But how does it work?

The technology that makes the HANI sensor possible is based on the law of heat conduction, which is also known as Fourier’s law. Fourier’s law states that the rate of heat transfer through a material is proportional to the negative gradient in the temperature and to the area, at right angles to that gradient, through which the heat flows.

HANI technology starts with the differential form of Fourier’s law of thermal conduction, which shows that the local heat flux density q is equal to the product of thermal conductivity k and the negative local temperature gradient.

The heat flux density is the amount of energy that flows through a unit area per unit time. For many simple applications, Fourier’s law is used in its one-dimensional form:

If we were then to rearrange that equation – we can solve for the temperature on the inside of the plate.

So, as long as we know the thermal conductivity and the thickness of the plate being measured, we can then calculate the temperature on the other side. Of course, this equation is for one dimensional heat transfer; so, for a pipe with thickness t and outer radius r, a shape factor must be applied:

Which can be substituted into our previous equation for one dimensional heat transfer:

Let’s break it all down:

Let’s say you have a pipe with fluid moving through it – that fluid is at temperature Tin, and it is what we want to solve for. You want to know the temperature of that fluid media. Maybe even at a specific point within your system.

You could use a traditional surface sensor, but you would be sacrificing accuracy – something professionals in a wide variety of industries simply cannot do.

Or you could use an immersion sensor, which is the ‘go-to’ for most professionals due to its high accuracy. But immersion sensors are invasive to the system, and this can often cause issues – issues like installation headaches, extra maintenance costs, contamination risks, and unwanted downtime.

But now, there is a third option: the HANI.

With its innovative clamp-on design, the HANI sensor mounts like a surface sensor and can literally be installed in seconds – all you need to do is clasp and latch it to the outside of a pipe, and it immediately starts calculating temperature inside the pipe. There is no invasive probe of ANY kind – so there’s no need for any of the drilling or welding needed to install immersion sensors. And because the HANI is non-invasive, it operates without making any contact with the in-pipe process media – eliminating the risk of sensor breakage or sensor drift.

The HANI also features a heat flux sensor which is also placed on the outside of that pipe. A heat flux sensor is, basically, a thin film thermopile and it tells you about the amount of heat loss or heat entry into the pipe. That is the variable “q” in the Fourier equation.

The HANI uses these two things – the Tout and the temperature gradient – and it plugs them into its proprietary algorithm.

In addition, it takes into consideration a few user inputs: pipe diameter, pipe thickness, and the pipe material.

THANI is the output of our proprietary algorithm and it is essentially the same as the temperature inside of the pipe (within plus or minus half a degree of accuracy).

Too Good to Be True?

To illustrate the effectiveness of the HANI technology, Ken and his team ran some experiments. To start with, fluid media was run through a pipe at a cold temperature. To this pipe, the engineering team had installed an immersion sensor (so that its probe was inside the pipe), had mounted a surface sensor on the outside of the pipe, and had clamped a HANI sensor to the outside of the pipe as well. After eight seconds, a valve was opened that mixed-in hot fluid media.

Ken and his team wanted to compare the accuracy and the response times of those three types of sensors.

This graph illustrates what happened. 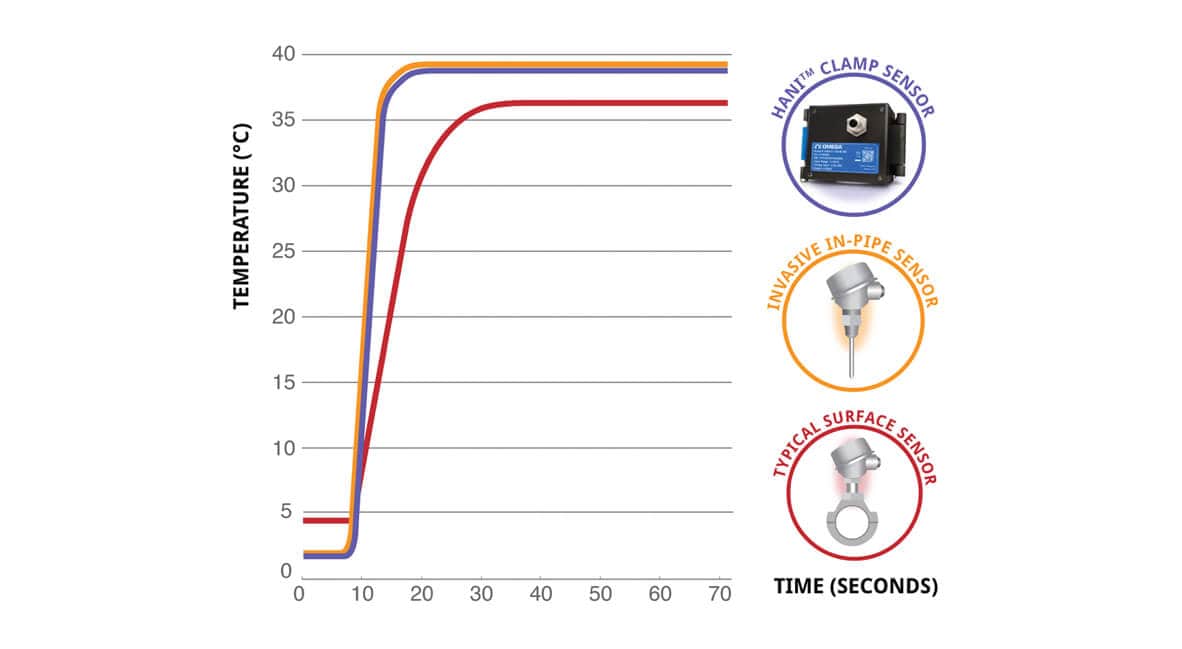 You can notice that the surface sensor, which is in red, has inaccuracy at the steady states: at both the lower and higher temperatures it tends toward the ambient temperature – so that there is a plus-or-minus of 10% at least. These surface sensors are very inaccurate, and they are very slow to respond.

The immersion sensor, on the other hand, is in yellow and is super accurate and responds very fast.

Omega’s HANI Clamp Temperature Sensor is, simply put, the best of both worlds – and IDEAL for so many different applications where accuracy is critical but invasive probes cause issues. Check out more about Omega’s HANI sensor here.