Measuring Temperature of Media Flowing Through a Pipe

The Problem with the Status Quo – A Not-So-Fluid Situation

So, you need to get an accurate temperature measurement of fluid media that is moving through a pipe.

It’s a situation in which a wide variety of professionals – from craft brewers and ice cream makers in the Food and Beverage industry to researchers and manufacturers in the Aerospace field – find themselves.

But what’s the best way to do it?

Our engineering team (led by Director of Engineering Ken Leibig) set out to answer this surprisingly complex question.

What are your options?

Ken and his team started out by comparing the different ways to measure the temperature of a fluid moving through a pipe or inside a tank – taking into consideration the pros and cons of each on a cost vs performance scale.

And what they quickly discovered was that the options are, simply put, not so great.

The first way you might attempt to measure the temperature of a fluid moving through a pipe or inside a tank is to use a surface sensor. Surface sensors are convenient, easy to install, and come in all sorts of shapes and sizes. You can stick them to the outside of a pipe, bolt them onto a pipe, or, if you’re not using stainless steel, attach them using a magnet to the outside of a pipe.

Surface sensors, however, have a major downfall: performance. They have very poor accuracy and slow response times because they measure the pipe surface temperature and not the temperature of the fluid itself. 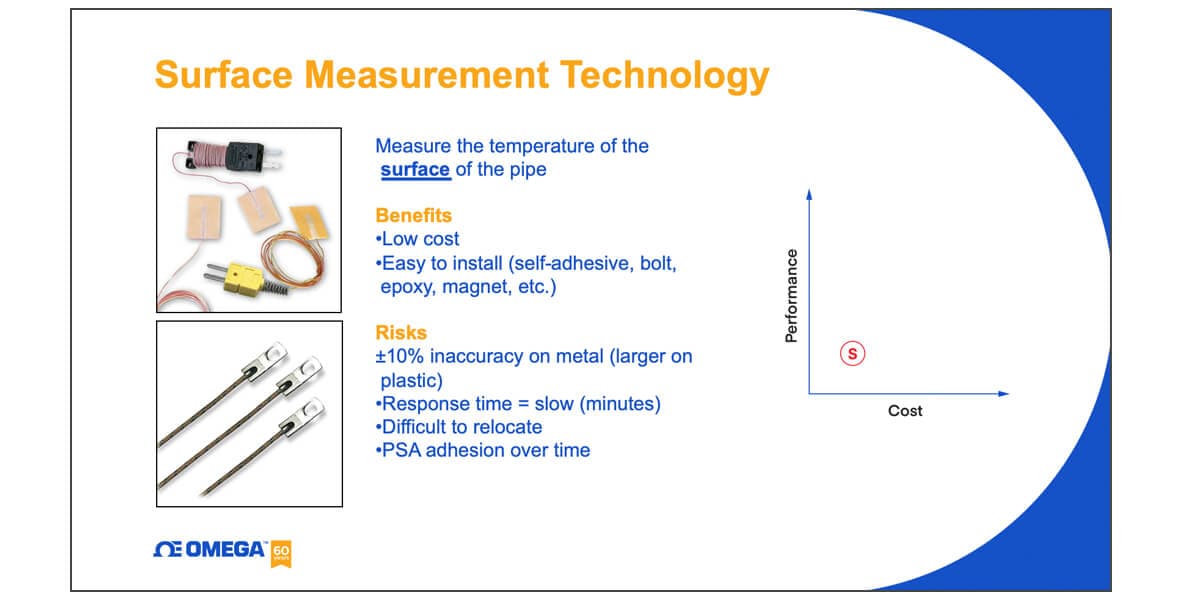 And so, if we look at surface sensors from the perspective of a cost vs performance scale, they are low cost but also low performance, and, therefore, not ideal for many types of applications.

The second way to measure the temperature of fluid moving through a pipe – and the current go-to method for most industrial applications – is with an immersion sensor. These sensors require the installation of sensor probes inside the pipe, so that the sensor can come in direct contact with the fluid media. As such, these types of sensors are invasive to the system. 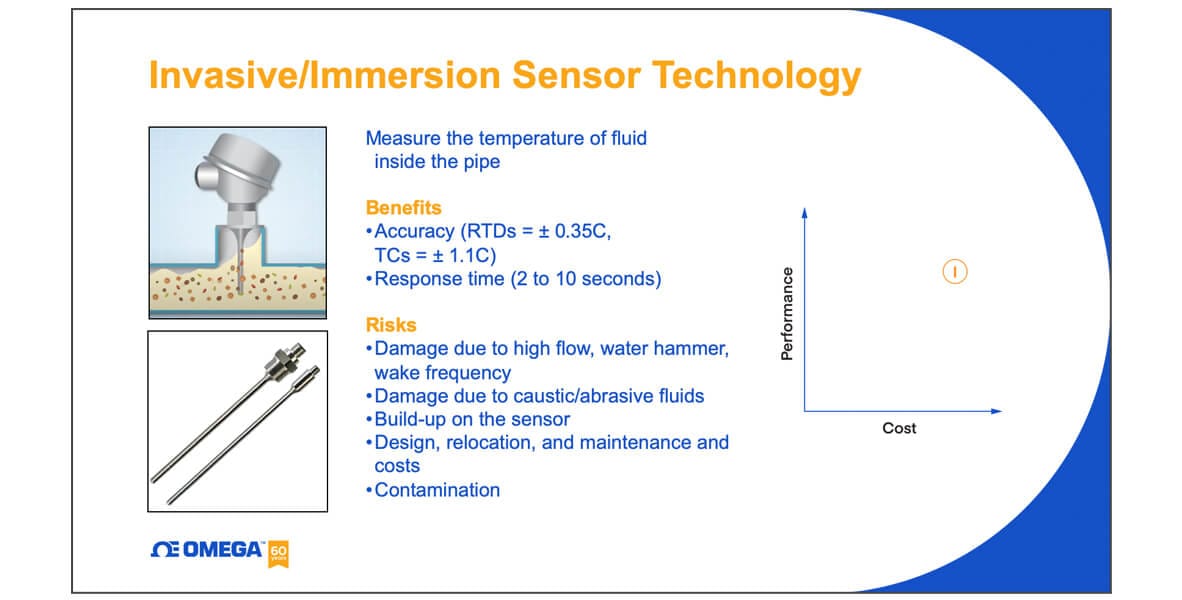 Immersion sensors have great accuracy and good response times – as long as you’re not using a thermowell. But immersion sensors have many risks. Because they’re immersed inside the pipe or tank, they can incur damage due to pipe flow, high pressure, water hammer, wake frequency, or caustic and abrasive fluids. And damaged sensor probes can create high risks of contamination.

Installation costs for immersion sensors are also quite high. And it’s not only the sensor cost itself – there are many other considerations that must go into the cost of an immersion sensor. You have the initial design cost of the system and the sensor, which include calculating the correct immersion depth, making sure the probe is in the center of the fluid flow, performing wake frequency calculations, and all the drawings associated with implementing an immersion probe.

Then you have the installation and testing of the probe. If you have buildup on the probe, or if you have damage due to high flow or caustic fluids, you then have the maintenance considerations of stopping your process, taking the probe out, dealing with unwanted downtime, as well as performing calibrations on the probe.

And if you decide you need to relocate that probe to a new location because your current sensing location isn’t desirable, then you must do all of that all over again – the installation, the testing, the maintenance, and the downtime.

It’s clear to see that immersion sensors can be quite costly over their lifetime – so, if you look at the price vs performance scale, they are high cost, high performance.

In fact, immersion sensors have long been referred to in the industrial world as a “necessary evil” - accurate, but with quite a bit of baggage.

Introducing the HANI: A Technology Breakthrough

Could there be a third option? Ken and the Omega Engineering team were up for the challenge.

The result of their endeavor: The Omega HANI Clamp on Temperature Sensor.

The HANI, which stands for High-Accuracy, Non-Invasive, is a groundbreaking technology that is a complete game-changer for measuring temperature of media within a pipe. This temperature sensor does what few thought was even possible – it clamps right onto the outside of the pipe and measures temperature of media inside the pipe with as much accuracy and with the same high-performance as invasive immersion sensors, but without any of the risks, maintenance, and downtime costs.

From unboxing to measurement-ready, HANI sensors take about 10 seconds to install – just wrap the sensor strap around the desired pipe and pull the quick-latch mechanism, automatically setting the tension for the specified pipe diameter. (One of our brewery customers described it as “literally the easiest thing I’ve ever done.”) There’s no need to cut, weld, drill, or shut down production to install or move a HANI sensor. And once mounted, you can start getting highly accurate, immersion-probe-level temperature measurements.

With surface sensors, you compromise performance for ease of installation and low costs.

Immersion sensors, which are the preferred option for most industrial applications, have high costs and risks of contamination in order to get the desired performance. They are the “necessary evil” of the industrial world. 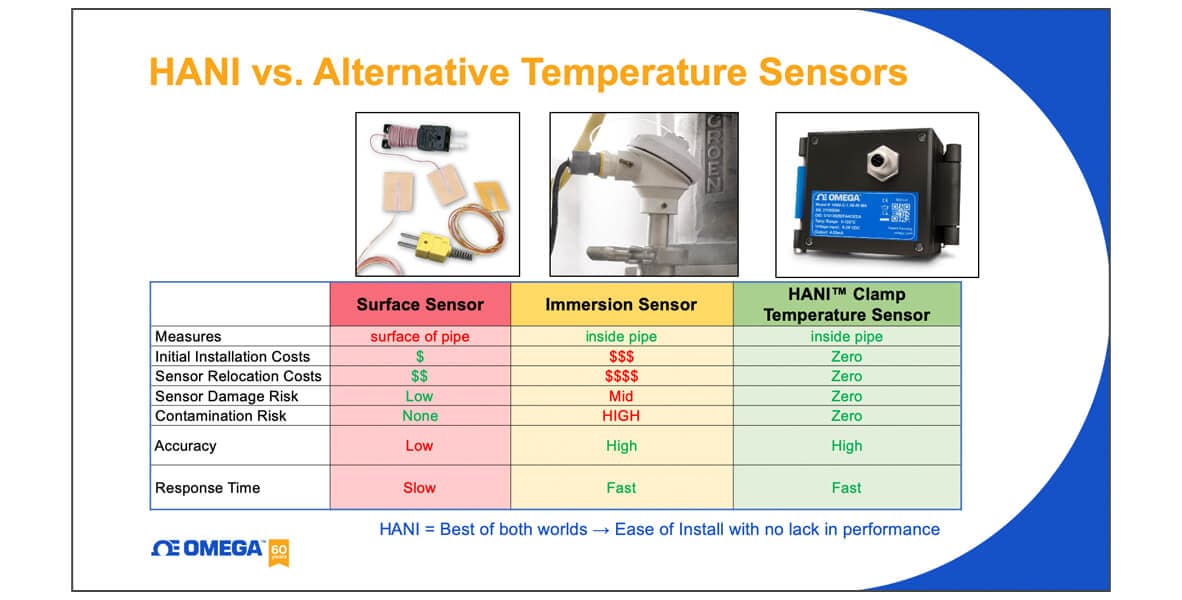 href="https://assets.omega.com/resources/resourcesRedesign.css" >
Shop with Confidence
Talk with our Experts
en-US
en
Save Configuration