The measurement system is made up of a sensing element with four strain gages applied to it. The strain gages are configured in a Wheatstone bridge, where all 4 resistors (labeled R1 thru R4 in Figure 2) are equal, and change by equal magnitude proportionally, when strain is applied. The greater the force or strain (input), the greater the output. A Wheatstone bridge device requires 4 wires for its connection, positive and negative excitation, and positive and negative sensor output.

For a typical pressure sensor, the deflection of a diaphragm produces a strain gage output. Depending on the strain gage technology the output can vary from 1 to 3 millivolts per volt (mV/V) to as much as 10 to 30 mV/V. To calculate your full scale output, you would multiply the output of the sensor by the voltage used to power the device. For example, for a 3 mV/V sensor, if we used 10 volts DC as our excitation voltage, we would expect to get 3 mV/V x 10V=30 mV at full scale. 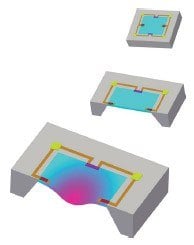 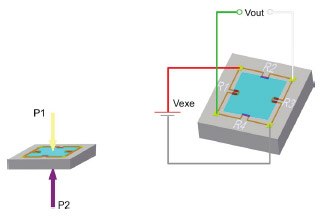 Figure 3 Typical Reaction of Diaphragm When Pressure is Applied.

One good example of this sensor theory is the PX4600. The pressure from the process that the customer is trying to measure will be brought to the diaphragm element through an access port. The pressure will cause a deflection of a diaphragm, stressing the Wheatstone bridge arrangement on the other side of the diaphragm, and creating a mV/V output. This millivolt signal is then read by a device capable of accepting a millivolt signal or to an amplifier or signal conditioner for further signal processing.

The PX409-USBH has a USB connector at the end of its cable for direct input into a laptop computer. The onboard electronics process the signal into a convenient, easy to use communication protocol. For a plug and play experience, use our free software that is available on our website. A unit can be connected to a laptop which will display and collect data while providing power to the sensor itself. 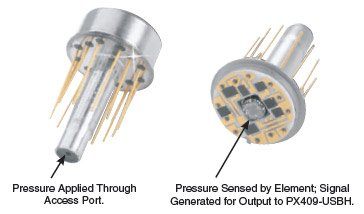 Figure 4 Example of Wheatstone Bridge Sensing Element on a Board Mountable Transducer. 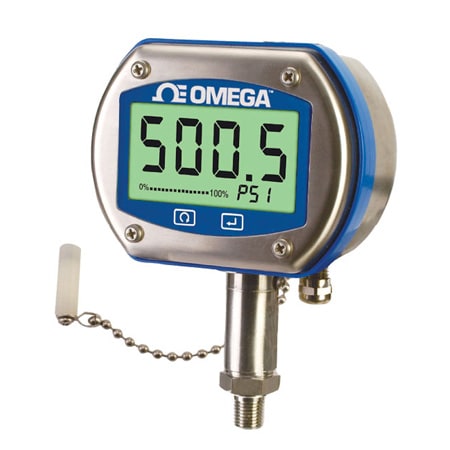 The DPG409 digital pressure gauge uses a digital output in its wireless transmitter versions. This allows acquisition of the readings from a remote line of sight location without having to run signal wire. A wireless receiver will accept this signal and display or log the data. 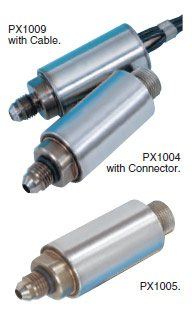 Unamplified
Most load cells have an unamplified output. Unamplified outputs are common with devices that are too small to be equipped with signal conditioning electronics, or where the environment is too extreme for electronics to survive. This is the case with the PX1004, PX1005, and PX1009 products, which are unamplified due to the very high and very low operational temperatures in which they are designed to function. Unamplified sensors have a rather short transmission distance capability, usually no longer than 6.1 to 9.1 m (20 to 30'). This is because the signal strength is so small. This also makes them susceptible to electromagnetic noise from the surrounding environment. 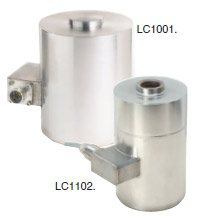 Figure 8
Amplified
Amplified sensors use internal signal conditioning electronics to create a stronger signal. This makes them less susceptible to environmental noise and capable of going longer distances to their receiving units. Sensors with internal amplifiers have a smaller operational temperature range due to temperature restrictions of the signal conditioning electronics inside the sensor.

Digital
The third type of sensor, as categorized by output, is a digital output sensor. This type of output has the potential to provide the lowest noise and longest transmission distances available. There are a number of communication styles available, such as the DPG409 and the PX409-USBH or RS485 devices.

Total Error Band
This is the band maximum deviation for any output when considering all defined sources of error, such as vibration or temperature or humidity. It is expressed as a percentage of the rated output. 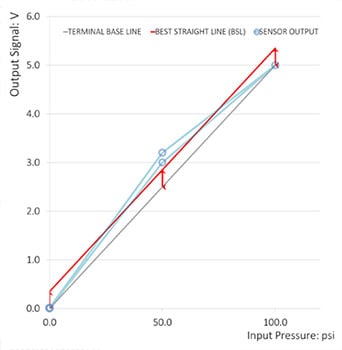 Figure 10
Static Accuracy
The combined effects of linearity, hysteresis, and repeatability, Static Accuracy is expressed as ±% of span, and is in reference to the BSL. The static error band is a good measure of the accuracy that can be expected from a pressure sensor or load cell at a constant temperature.

Non-Linearity
This is the maximum deviation of the calibration curve from a straight line drawn between the no-load and rated outputs. It is expressed as a percentage of the rated output and measured on increasing pressure load only.

Hysteresis
Hysteresis is the maximum difference between output readings for the same applied pressure, approached from opposite directions. It is determined by comparing outputs for a pressure value, first obtained by approaching from lower pressure and then by approaching from a higher pressure. The closer the two readings are, the lower the hysteresis. This error is difficult to correct.

Repeatability
The maximum difference between output readings for repeated pressure loads, under identical load and environmental conditions, is called repeatability. The closer these readings are, the better the repeatability. This error cannot be corrected.
Jump to Section