Ultrasonic flow meters are non-intrusive devices that use acoustic vibrations (ultrasonic waves) to measure flow rate of liquids. There are two types of ultrasonic flow meters, Doppler and transit time. Both are designed to clamp onto the outside of the pipe wall without breaking the line or interrupting the flow.

The Doppler and transit time flow meters operate on a similar principle, but the technology varies significantly. To obtain accurate measurements, it’s important to know which flow meter to use for your application.


What is a Doppler Ultrasonic Flow Meter?

The Doppler ultrasonic flow meter operates on the principle of the Doppler Effect (or Doppler shift), which was documented by Austrian physicist and mathematician Christian Johann Doppler in 1842. He stated that the frequencies of the sound waves received by an observer are dependent upon the motion of the source or observer in relation to the source of the sound. A Doppler ultrasonic flow meter uses a transducer to emit an ultrasonic beam into the stream flowing through the pipe. For the flow meter to operate, there must be particulates, such as solid particles or air bubbles, in the stream to reflect the ultrasonic beam. The motion of particles causes a frequency shift of the beam, which is received by a second transducer. Doppler flow meters are often used for the flow measurement of such fluids as slurries.

Where Ct is the velocity of sound inside the transducer, f0 is the transmission frequency, f1 is the reflected frequency, and a is the angle of the transmitter and receiver crystals with respect to the pipe axis. Because Ct / 2f0cos(a) is a constant (K), the relationship can be simplified to:

Thus, flow velocity V (ft/sec) is directly proportional to the change in frequency. The flow (Q in gpm) in a pipe having a certain inside diameter (ID in inches) can be obtained by:

The presence of acoustical discontinuities is essential for the proper operation of the Doppler flow meter. The generally accepted rule of thumb is that for proper signal reflection there be a minimum of 80-100 mg/l of solids with a particle size of +200 mesch (+75 micron). In the case of bubbles, 100-200 mg/l with diameters between +75 and +150 microns is desirable. If either the size or the concentration of the discontinuities changes, the amplitude of the reflected signal will shift, introducing errors.

What is a Transit Time Ultrasonic Flow Meter?

Transit time ultrasonic flow meters measure the difference in time from when an ultrasonic signal is transmitted from the first transducer until it crosses the pipe and is received by the second transducer. A comparison is made of upstream and downstream measurements. If there is no flow, the travel time will be the same in both directions. When flow is present, sound moves faster if traveling in the same direction and slower if moving against it. Since the ultrasonic signal must traverse the pipe to be received by the sensor, the liquid cannot be comprised of a significant amount of solids or bubbles, or the high frequency sound will be abated and too weak to travel across the pipe.


When the flow is zero, the time for the signal T1 to get to T2 is the same as that required to get from T2 to T1. When there is flow, the effect is to boost the speed of the signal in the downstream direction, while decreasing it in the upstream direction. The flowing velocity (Vf) can be determined by the following equation:

Where K is a calibration factor for the volume and time units used, dt is the time differential between upstream and downstream transit times, and TL is the zero-flow transit time.

Theoretically, transit-time ultrasonic meters can be very accurate (inaccuracy of ±0.1% of reading is sometimes claimed). Yet the error in these measurements is limited by both the ability of the signal processing electronics to determine the transit time and by the degree to which the sonic velocity (C) is constant. The speed of sound in the fluid is a function of both density and temperature. Therefore, both have to be compensated for. In addition, the change in sonic velocity can change the refraction angle (“a” in Figure 1B), which in turn will affect the distance the signal has to travel. In extreme cases, the signal might completely miss the downstream receiver. This type of failure is known as walk-away.

What are the Differences between a Doppler and Transit Time Ultrasonic Flow Meter?

Doppler flow meters are not recommended for clean fluid applications. Transit time flow meters, on the other hand, are often used to measure the flow of crude oils and simple fractions in the petroleum industry. They also work well with viscous liquids, provided that the Reynolds number at minimum flow is either less than 4,000 (laminar flow) or above 10,000 (turbulent flow). Serious non-linearities are present in the transition region (Figure 2).


Transit time flow meters are the standard for measuring cryogenic liquids down to –300°C and are also used in molten metal flow metering. Measurement of liquid argon, liquid nitrogen, liquid helium, and molten sulfur have often been reported.

Raw wastewater applications usually have too few acoustic discontinuities for Doppler flow meters. However, raw wastewater is not clean enough all the time for transit time measurement. Other wastewater-related applications can be equally problematic.

Doppler flow meters typically work well for measuring activated sludge, digested sludge, and mining slurries. However, slurries that are acoustically absorbent, such as lime or kaolin slurries, can be problematic. 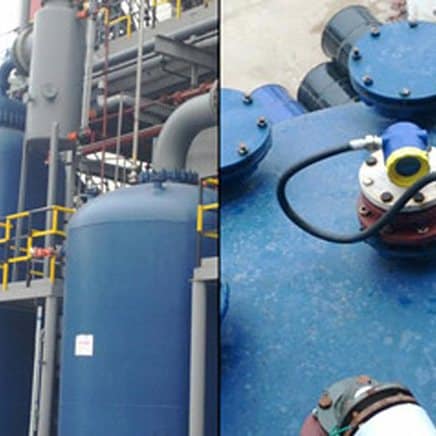 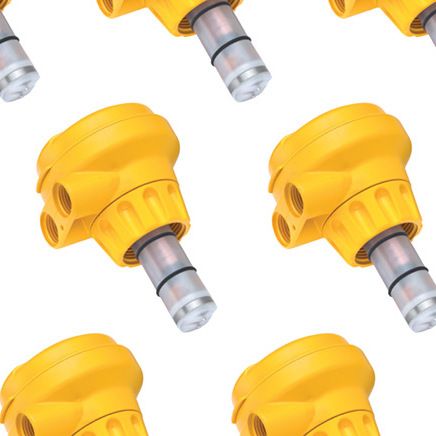