What is a PID Controller? 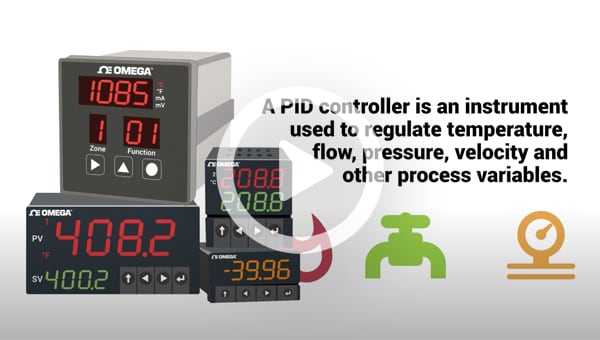 A PID controller is an instrument used in industrial control applications to regulate temperature, flow, pressure, speed and other process variables. PID, which stands for proportional integral derivative, controllers use a control loop feedback mechanism to control process variables and are the most accurate and stable controller. In this ther article, how a PID works is explained in more detail.

PID control is a well-established way of driving a system towards a target position or level. It's a practically ubiquitous as a means of controlling temperature and finds application in myriad chemical and scientific processes as well as automation. PID control uses closed-loop control feedback to keep the actual output from a process as close to the target or setpoint output as possible.

What is a PID Temperature Controller?

What is a Digital PID Controller?

A digital PID controller reads the sensor signal, normally from a thermocouple or RTD and connects the measurement to engineering units, such as degree Fahrenheit or Celsius, that are then displayed in a digital format.

The first evolution of the PID controller was developed in 1911 by Elmer Sperry. However, it wasn't until 1933 that the Taylor Instrumental Company (TIC) introduced the first pneumatic controller with a fully tunable proportional controller. A few years later, control engineers went eliminate the steady state error found in proportional controllers by resetting the point to some artificial value as long as the error wasn’t zero. This resetting “integrated” the error and became known as the proportional-Integral controller. Then, in 1940, TIC developed the first PID pneumatic controller with a derivative action, which reduced overshooting issues. However, it wasn’t until 1942, when Ziegler and Nichols tuning rules were introduced that engineers were able to find and set the appropriate parameters of PID controllers. By the mid-1950’s, automatic PID controllers were widely adopted for industrial use.